Navy Sea Cadet James Boerst passed away on July 20th, 2018 in a car accident.  Cadet Boerst joined in marching with the Lomira American Legion the past 2 years in the Knowles 4th of July Parade.  James often mention that his father served with the U.S. Navy.  He also mentioned his Grandfather who was a Vietnam Veteran and received a Purple Heart.  He also fondly talked of his Grand Uncle, Robert Wondra, a “Paid Up For Life” member of the Lomira Legion Post 347.  Robert also is a Vietnam Veteran and Purple Heart recipient.

James was proud to follow in the footsteps of his father, grandfather and grand uncle as shown in his activities with different Legions and civic organizations.

*     Volunteer with Theresa Fire Department where his father (Tim Boerst) is also a member.

*     Marched in Parade in Theresa with Fire Department and Legion.

*     Was on Lomira High School committee to raise and lower American Flag as needed. 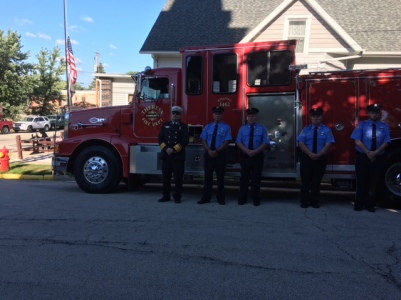